After a fire at a student house in Bloomington Indiana, people came together and gave what they had to get these young men back on track during their first week of school.  Community is an amazing thing.

I received a text from my friend David yesterday.  He said things are going great and everyone gave them such nice stuff.   He also said thank you, so I’m passing it along.

This is my friend David. 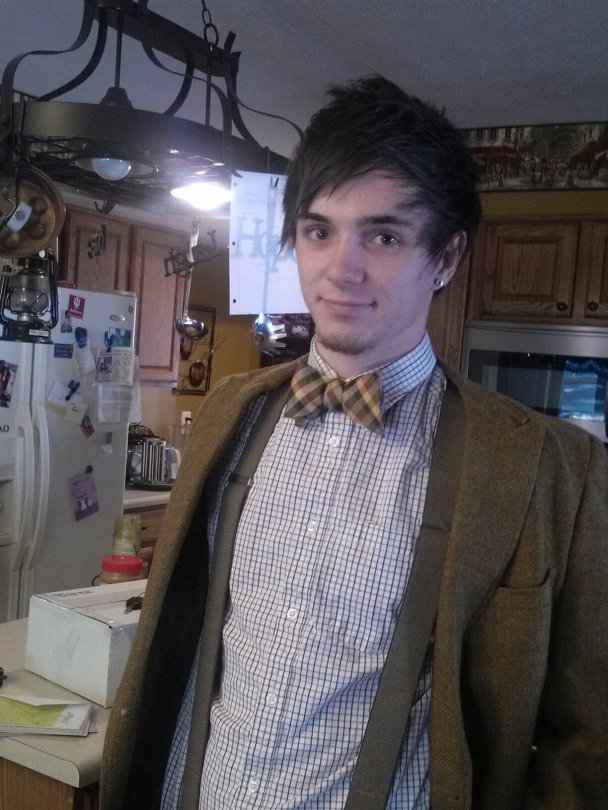 Last weekend David and three of his friends moved all their college stuff into a house in Bloomington Indiana to start the fall semester at IU.  Three days before the first day of class (today), their house caught fire resulting in this: 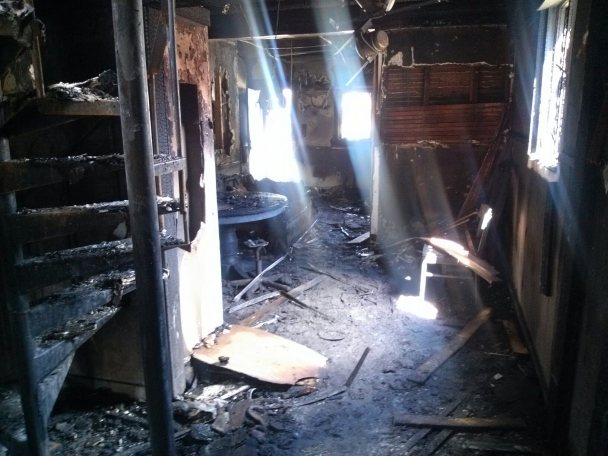 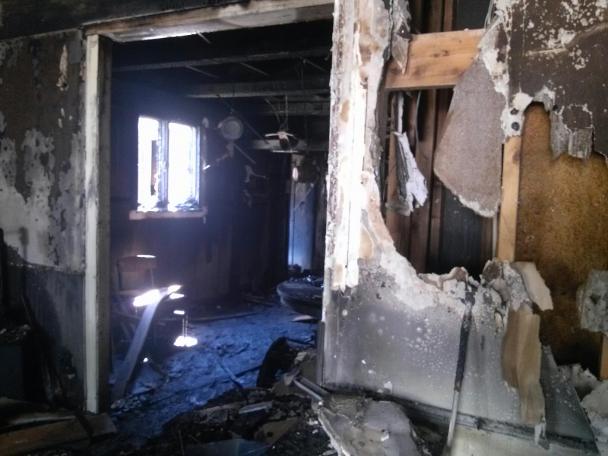 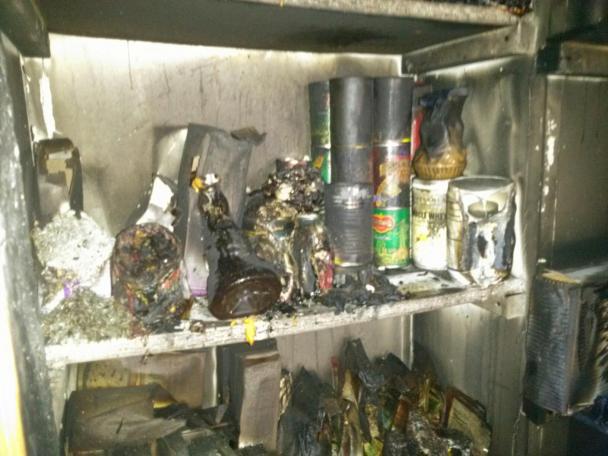 Thanks to some brave firefighters and the grace of God, all the young men are okay.  But, here they are on the first day of school with no furniture, bath towels, kitchen items, books, or school supplies.  They’ve found another house to stay in but things are very sparse.  It you have something you’d like to donate to help these boys, please contact me at jyager@yagerandsons.com.  Thanks. 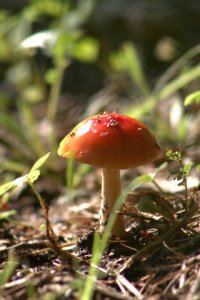 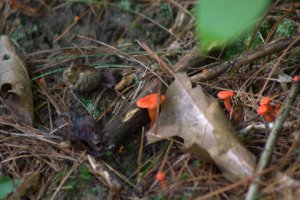 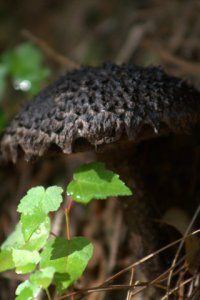 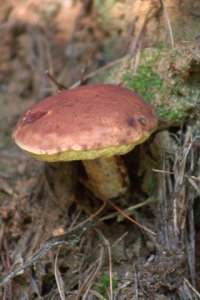 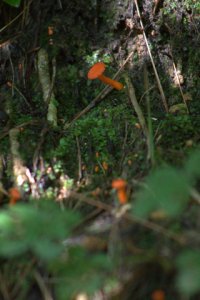 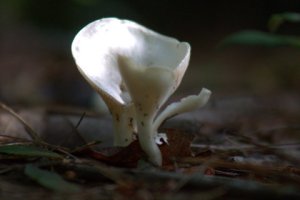 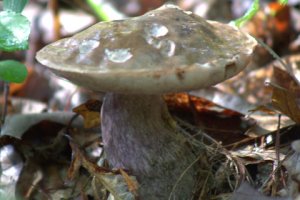 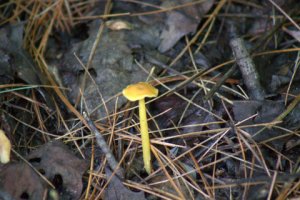 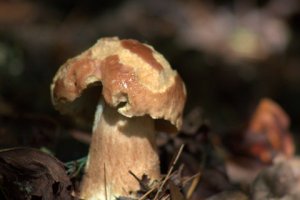 After a sudden downpour yesterday, Dad and I took a walk and everywhere we turned, mushrooms and toadstools had popped up on the forest floor.  So magical. 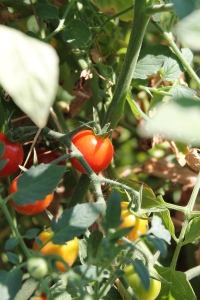 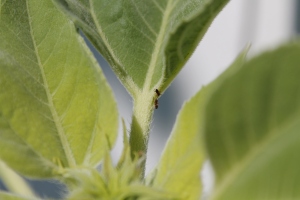 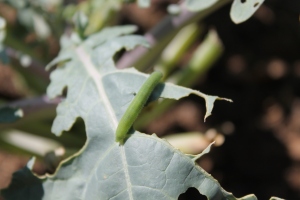 Yes.  I am sharing my kale with worms.

Central Indiana is having a terrible drought and a stint of above 100 degree weather.  Our well has faithfully provided us with water, a true test to its depth.  We are blessed.

I’ve noticed how the wild animals in our yard are being resourceful.  I saw a female cardinal sticking her beak deep inside the water sprinkler in our garden to glean a tiny drop that had yet to evaporate.  I notice butterflies flock to flowers I have recently watered to drink from the drops still hanging on leaves and petals.  My friend has watched squirrels steal green tomatoes from her garden, I assume, for the moisture they contain.  Thirst is a common denominator of late.

So, I’m sharing my kale with worms.

“And do not forget to do good and to share with others, for with such sacrifices God is pleased.”  Hebrews 13:16 (NIV) 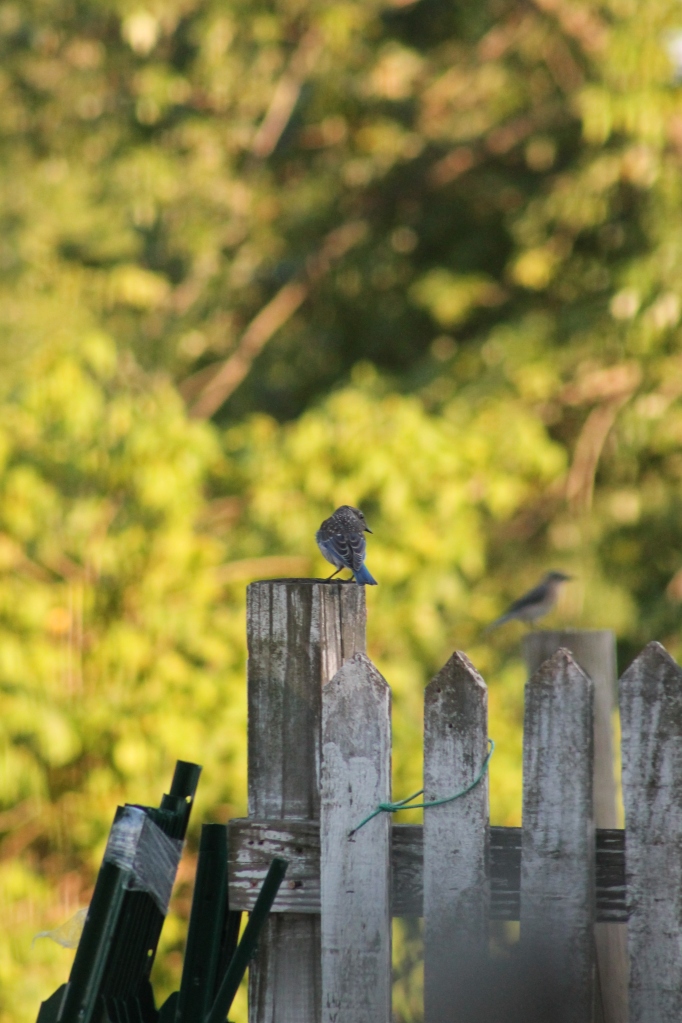 I’ve been watching a couple of Eastern Bluebirds in my yard since spring.  Against the backdrop of my neighbor’s barn, they’ve built their home inside a rustic gray bird house nailed against an ancient power pole.  I watched as they worked days and days on end bringing back scraps of bark and twigs and string.  I witnessed their war with a Mockingbird who insisted he was moving in too.  The smaller blue birds won through tenacity alone.  I waited patiently hoping to see evidence of a new family for the two.  The multitude of bugs they carried in through the perfectly sized hole in the front of their house was surely for feeding chicks.  I watched and waited content in the cool mornings to sit and listen to the Bluebirds and their hundred bird choir fill the morning with song.

My folks came for a visit late last spring and we sat on the porch as usual drinking our coffee and watching the Bluebirds.  I asked my dad how many birds he thought were singing at once and he replied, “Hundreds.”  My mom looked up from her phone and asked, “You can hear birds singing?”  My heart sank.  Hundreds of birds were filling the morning air with sound and my mom couldn’t hear a single one.  We had known for some time that Mom was struggling with her hearing.  There were misunderstandings and requests for repetition of phrases which she would repeat back incorrectly and we would rephrase thinking she didn’t understand.  But it was shocking to realize that she was missing something as significant to me as bird song.  She was living in a different world than me, one with no bird sounds and it made me sad.  She promised to look into a hearing aid as soon as she returned home.

The Bluebirds showed up less and less as summer turned hot and dry.  Their baby birds never revealed themselves while I was on watch.  Dad had his hip replaced and Mom had her final surgery after fighting cancer for years and surviving.  Grandma turned 90 while the whole town showed up to celebrate and Mom got a hearing aid.

Mom and Dad came back for a visit over the fourth of July and the Bluebirds returned too.  We sat on the porch together again, though the morning breeze was much hotter, and watched as the Bluebirds repaired their nest.  In and out of that little hole they came and went and we pondered a second batch of chicks.

It’s amazing the things we take for granted.  To know I can sit on the same porch with my mom and have such an entirely different experience in the same moment.  My world full of song, her’s nearly silent.  Mom feels good.  She’s happy now, and she can hear the birds sing. 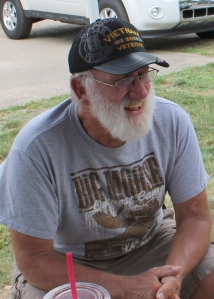 This guy is my dad.  I get to spend the 4th of July with him (and my mom, brother and sister-in-law too.)  He got a discount on his coffee at McDonald’s today because of what that hat represents.  He’s a veteran and there was a time when he caught flack for that.  It means a lot when someone acknowledges his service.  So, if you see this guy, shake his hand and say thanks. 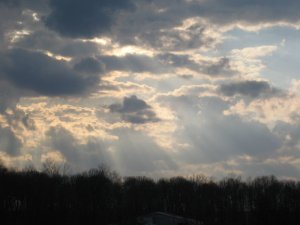 The Weather Channel had a picture of a cloud and lightning with raindrops in the 7 o’clock slot last night.  We’ve been praying for rain all month and now it’s getting critical.  I read in the newspaper that our small town only has minute’s worth of water in the tower it uses to supply the fire hydrants here.  It’s dry and we’re approaching the fourth of July.  Common sense would indicate avoiding anything with a spark but odds are someone is going to do something stupid.

So, we’ve been praying for rain.  We’ve hung our hopes on that little icon of a thunderstorm.

After a hot sunny day with temperatures at somewhere near 105 degrees, the sky clouded over and then the wind picked up, a lot.  I went outside to check the sky because I’m one of those crazy people who goes outside when a storm is approaching.  I could smell it, ozone in the dry air.  I could feel the humidity rise around me.  The scorching wind was building and dust was puffing up from the dry grass as debris blasted across the yard.  I scrunched up my eyes to protect them then threw out my arms and turned full circle as I was joined by my son and his girlfriend.  “Can you believe it,” I asked.  “It really might rain.”  We were joyous, giddy really.  I grabbed their hands and we ran to the driveway and danced in a circle and then my husband and younger son joined us.  “You’re doing it wrong,” my older son said.  “This is how you do a rain dance!”  He slapped his knees and did a little jig and then slapped his shoulders in a crisscross and kicked out his heels.  We tried to copy his steps and ended up laughing and spinning around in the wind with our arms outstretched, palms open to the sky.  In the suddenly cool wind, I felt a single drop of rain hit my palm and evaporate.   It was there and then it wasn’t.  I prayed for rain and I received a single drop.

The purple sky soon lightened to gray; the wind died and the sunshine returned.  The ground was still as parched as before the storm and we all returned to whatever we were doing before the wind came.  I received a single drop of rain and the memory of a joyous random dance with my family. 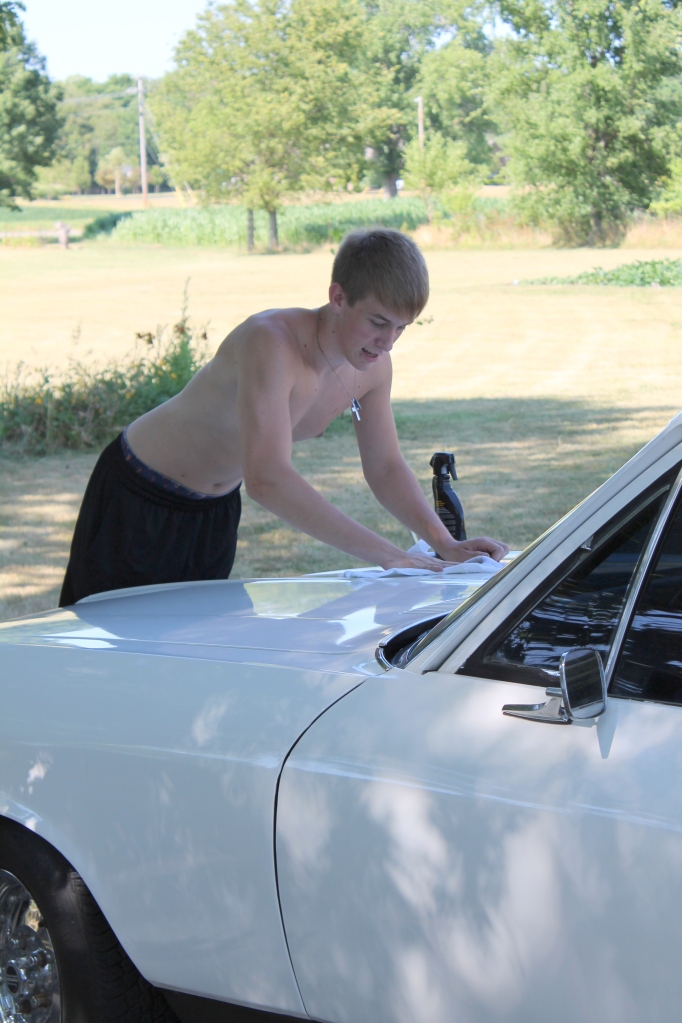 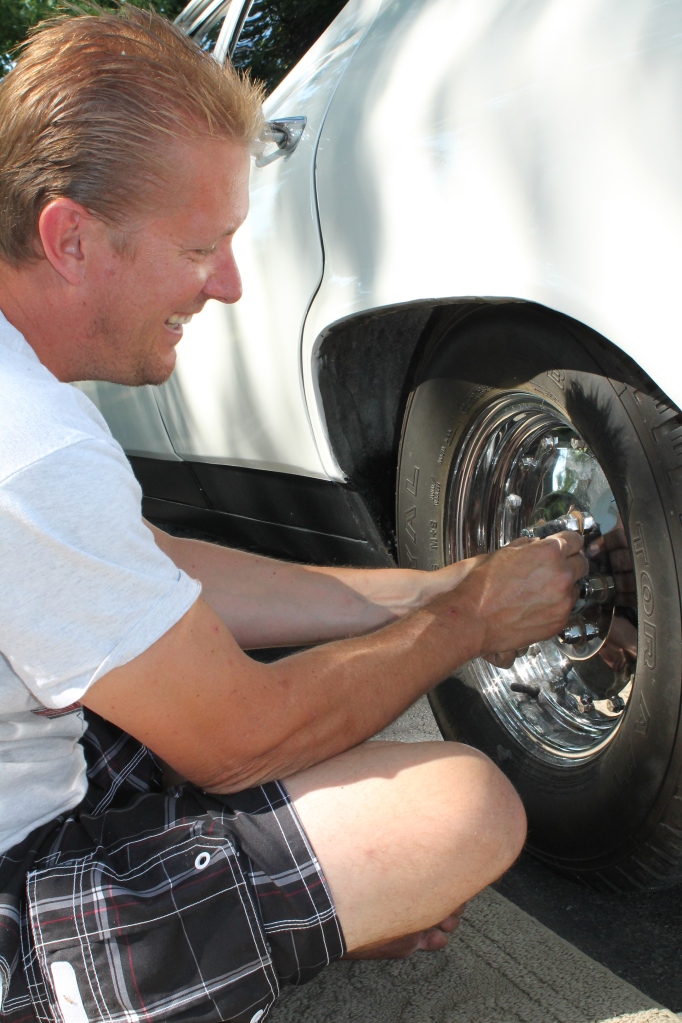 It’s even better when the dad is wearing plaid swimming trunks.

The first harvest of the season is always the most exciting. 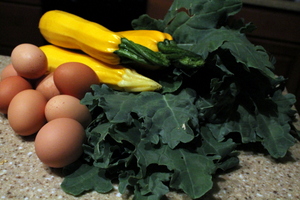 Closing a chapter and turning a page.  It’s always bittersweet.  I’ve been thinking about this a lot lately as my kids have become grown men right before my eyes.  Yesterday, I met some friends to turn the page on a poignant time in my life.  For two summers, we showed up to put on a little Shakespeare in the Park under the leadership of Gary.  He brought us all together.  Outside the fray of the community he and his wife assembled for the task, I met so many great people.  We worked together, ate and drank together, and raised kids together.  And then Gary died, suddenly, and we were left without our leader.

Yesterday, I met his wife and her fiancé along with a few friends to empty the storage container left unchecked since that last summer together.  Right away, Gary’s absence was evident.  The container was locked with a combination lock and as his wife Andrea said, “the combination died with Gary.”  Bolt cutters made quick work of the stumbling block but the look on Andrea’s face stays with me.  How many times a day is she hit with these tiny reminders that he is really gone?

We sorted through crates and made piles. There was a sewing machine, an electric fire log, and a large blue cooler.  We found wooden swords that prompted reminiscing and Macbeth’s severed head brought laughter.  We carried sheet after sheet of painted flats and platforms on wheels and frames for risers to the U-Haul truck. The items Andrea chose to keep were practical and small.  Props and fabric were selected to be donated to high school theater departments and local acting troupes and I offered to dispose of whatever was left.  The decision was made to move it all to our house to be stacked up behind our construction shop.  I now own the remainder of those summers.  Maybe I was just offering my friend a solution.  Maybe I just wasn’t ready to let that stuff go.